During the winters, an annual event organized in the Golden City of Rajasthan – Jaisalmer makes the desert come alive with bright and vibrant colours. This three days festival held every year in the month of February showcases the rich Rajasthani folk culture. The entire city of Jaisalmer is bustling with colours, music and dance, Rajasthani men and women dressed beautifully in hued costumes sing and dance on the haunting ballads of valour, romance and tragedy. The Desert Festival is a great extravaganza with various competitions and contest happening such as turban tying competition, longest moustaches competition, entertaining puppet shows, folk dance competition and renowned musicians participate in various folk musical recitals. Camels also are one of the main highlight of this event as they take part in camel polo, camel dance and some other contests. This joyful festival of traditional Rajasthani culture and performing art and craft comes to an end with a captivating sound and light show amidst the sand dunes on a moonlit night.

Second largest fair of India - Nagaur Fair is celebrated for eight days every year in the month of January – February in the Rajput town of Rajasthan – Nagaur. The fair is mainly known for its animal trading and displays thousands of animals which are magnificently decorated with colourful accessories to attract traders gathered from various places here. The fair is famous as Cattle Fair as it boasts of trading about 70,000 bullocks, cows, camels, and horses. The owners of the animals also dress with colourful turbans and long moustaches and are very enthusiastic about selling their animals at the best possible price. Besides the trade of animals some other attractions of the fair include Mirchi bazaar (largest red chilly market of India), wooden items and camel leather accessories. Visitors enjoy the exciting sports activities being held here such as tug of war, camel races, bullock races, cock fights and many more. The evenings with campfire and puppet shows is a delightful experience that gives the feel of the desert stillness and enchanting ambience with folk music of Jodhpur.

The famed Pushkar fair is one of the largest camel fairs in the world. The fair takes place for five days every year in the holy city of Rajasthan – Pushkar on the banks of the Pushkar Lake. The main activity of this fair is the trading of livestock such as camels, horses and cattle between villagers who come from different parts of the state. Pushkar Fair has become one of the major tourist attractions of India and many tourists attend this annual fair with great joy. Some of the enthralling competitions such as matka phod, longest moustache, turban tying and balancing on camel contests are part of the fair. During this fair thousand of devotees throng the lake around Kartik Purnima in October-November to take a holy dip in the lake to wash away their sins. The fair jostle into life in Pushkar and the small town of Rajasthan becomes an extraordinary place of colour, music and movement.

The only hill station of Rajasthan – Mt. Abu celebrates the Summer Festival every year in the month of June. This three day festival held amidst steep rocks, serene lake and pleasant climate of Mount Abu is a wonderful opportunity to have a sneak in the tribal life and culture of Rajasthan. The event has some spectacular folk music and dance shows, sporting boat race on the Nakki Lake and Sham-e-Qawwali adds a variety to the festival. At the end of the festival sparkling fireworks are showcased that makes the festival memorable one.

The Sun city of Rajasthan - Jodhpur organises Marwar Festival also known as Maand Festival in the month of Ashwin (September – October) which is held for two days. The festival is dedicated to the folk heroes of Rajasthan and a display captivating folk music and dance of the Marwar region, which revolves around the lifestyle of the former rulers of Rajasthan and this act, is known as Maand. Camel tattoo show and camel polo are some other attractions of the festival. Umaid Bhavan Palace, Mandore and Mehrangarh Fort makes up as perfect host to the festival.

Camel the ship of the Desert holds a very important place in the heart and lives of Rajasthani people. To recognize the importance of this useful animal, Camel Festival is celebrated with great joy in Bikaner every year in the month of January. This grand celebration brings Bikaner city to life as the event opens with beautiful & colourful procession of ornamented and accessorized camels that walks gracefully. The magnificent and massive Junagarh Fort serves as the perfect backdrop to the festival. Many activities takes place after the opening procession such as tug-of-war, camel dance competitions, puppet show, the best breed of camel contest and many more enjoyable actions are seen. The best part of the festival is the wonderful and amazing Camel Dance show in which the brilliantly trained camels dance in synchronisation to the drumbeats and music played for them and leaves everyone almost speechless.

Gangaur is one of the most significant festivals for women of Rajasthan and is celebrated for eighteen long days. The festival is held in honour of goddess Gauri, who is believed to be the goddess of marital happiness. This festival is celebrated all over Rajasthan by both married and unmarried ladies. The goddess Gauri images are beautifully ornamented and decorated and offerings are made to please her and in turn get blessed with good husbands and health, wealth and long life for their husbands. There is a huge procession taken out of goddess by the ladies of Rajasthan dressed brightly in beautiful attires and sing songs of departure of Gauri to her husband’s house.

Teej is a unique festival celebrated all over Rajasthan and some parts of North India, but the real fun and joy of this festival can be seen in Jaipur. Teej is dedicated to goddess Parvati and takes place on the onset of monsoon somewhere in the month of July - August. Jaipur celebrates the festival with lots of enthusiasm, women and young girls dress up with colourful clothes and accessorises with bangles and jewellery with mostly green colour as it symbolises freshness. Decorated swings are hung from trees in various gardens and lawns all over on which women and girls enjoy themselves and sing songs to welcome monsoon. 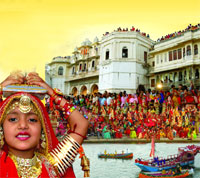 Mewar Festival welcomes the onset of the spring season and coincides with Gangaur Festival. Celebrated in Udaipur annually in the month of March – April, it is a three day event which holds an important place for women. There is a huge procession taken out in which women are the main participants, they carry the idols of Gangaur and Isar through different parts of the city singing and dancing. At Lake Pichola procession concludes and the idols are shifted into boats at the ghat. Devotional songs, dance performances and a number of other programs are organized that highlight the Rajasthani culture during Mewar festival. This three-day festival ends with a beautiful display of fireworks.

A unique event held in the capital city of Rajasthan – Jaipur is the Elephant Festival. It is celebrated on the day of Holi, the Indian festival of colours which is celebrated all over the country. The festival opens with Elephant’s catwalk pageant, these giants are marvellously decorated and painted from trunk to tail with glittering colours and accessorized with ornaments and embroidered velvets. The impressive procession also includes chariots, camels, horses, cannons and palanquins etc that enthral the audience. Polo game and races also entertain people there and lastly everybody celebrates the vivid festival Holi with full fun and joy.

Urs Festival is one of the most important and significant festivals of the Muslim community of India as it marks the death anniversary of the Sufi saint, Khwaja Moin-ud-din-Chisti. This festival is celebrated at the lakeside city of Ajmer in Rajasthan where the holy Dargah Sharif is situated which houses the mortal remains of the saint. The festival takes place on the first six days of the seventh month of the Islamic calendar, known as Rajab. Devotees from all over the country gather at the Ajmer Dargah Sharif to pay their respects to the Khwaja. They also give rich offerings that include sandalwood paste, roses, perfumes, jasmine flowers, incense, etc.