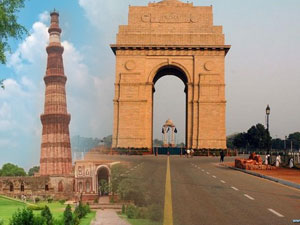 Day 01 : Arrival at Delhi and sightseeing 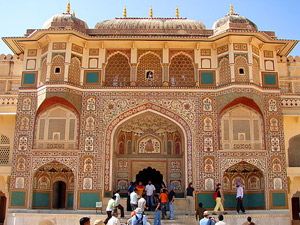 After having a sweet breakfast at the hotel,start the remaining sightseeing of Jaipur.Visit the Amber fort and enjoying the elephant ride at Amber fort, Make a visit to Hawa Mahal – the World famous land mark of Jaipur, City Palace – the palace still serve as home to the former maharaja. The architecture is an imposing blend of traditional Rajasthan and Mughal art, Jantar Mantar– an astronomical observatory, built to stimulate interest in astronomy stop and have a view of Jal Mahal – a Palace built amidst a lake and intended as the Summer resort for the royal family, make a photo session.In the evening you can also pay a visit to Chokhi dhani(Rajasthani restaurant)(optional).
Overnight stay at the hotel.

After having a toothsome breakfast at the hotel,drive to Agra. En-route visit Abhaneri step-well(optional) and Fatehpur sikri.
On arrival at Agra transfer to the hotel for check-in and have some time for relaxation.Visit Agra Fort- containing the Pearl Mosque - the rusty and majestic red- sandstone fort of Agra stands on the banks of the river Yamuna and the construction was started by Emperor Akbar in 1566. At the Diwan-I-Khas where marble pavilions with floral inlays lend an ethereal ambience, the Emperor sat on his gem-studded peacock Throne and met foreign ambassadors and rulers of friendly kingdoms. Also visit Itmad-up-Dau’s tomb, built by Noorjehan in memory of her father.Overnight stay at the hotel.

Early morning visit Taj Mahal at Sunrise. Then after having breakfast at the hotel, drive to Orchha which is 124 kms from Gwalior. After arrival check-in at the hotel and have some time for relaxation. Then pay a visit the popular temples in Orchha such as the Ram Raja Temple and Chaturbhuj Temple. These temples were built by Bundela rulers in the 16th and 17th century. Overnight stay at the hotel. 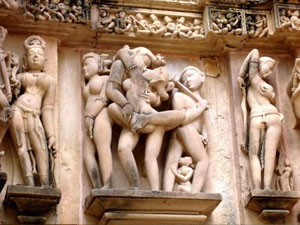 After having breakfast morning drive to Khajuraho. After arrival check-in at the hotel and have some time for relaxation. After relaxation, you would visit Western group of Khajuraho temples such as Chitragupta Temple is an 11th century temple, dedicated to Surya Dev (Sun God). Vishvanatha Temple is a Hindu temple in Madhya Pradesh, India. It is located among the western group of Khajuraho Monuments. The temple is dedicated to Lord Shiva, who is also known as "Vishvanatha" meaning "Lord of the Universe". Lakshmana Temple is a Hindu temple built by Yashovarman, located in the Western Temple complex in Khajuraho. This temple is dedicated to Vaikuntha Vishnu – as aspect of Vishnu. Matangeshvara Temple is a Shiva temple in the Khajuraho town. It is located among the Western group of temples. Among the Chandela-era monuments of Khajuraho, it is the only Hindu temple that is still actively used for worship. Later return back to hotel and free for your own activities or explore local market of Khajuraho.
Overnight stay at Khajuraho hotel.

After breakfast, proceed for sightseeing tour of Eastern group of Khajuraho Temples and visit to Parshvanatha Temple-is a 10th-century Jain temple located in the Eastern group of Khajuraho Monuments. It is now dedicated to Parshvanatha. The temple entrance has an inscription with a most-perfect magic square;Ghantai Temple, also known as the Ghanti Temple, is a ruined Jain temple in the Khajuraho. Similar in style to the Parshvanatha temple, it was dedicated to the Jain tirthankara Rishabhanatha; Adinatha Temple-is a Jain temple located at Khajuraho. It is dedicated to the Jain tirthankara Adinatha, although its exterior walls also feature Hindu deities. This is the last of Jain temples built around here. The temple is magnificently decorated with different sculpted figures including those of "yakshis";Duladeo Temple is a Hindu temple, dedicated to Lord Shiva in the form of a linga, which is deified in the sanctum. Dulodeo means "Holy Bridegroom". The temple is also known as "Kunwar Math". Chaturbhuja Temple-is dedicated to Lord Vishnu. The name Chaturbhuj is a derived from Sanskrit, which literally means one who has four arms and refers to Lord Vishnu.This is the only temple in Khajuraho which lacks erotic sculptures.
After these wonderful temples tour, free for your own activities or explore local markets of Khajuraho.
Overnight stay at Khajuraho hotel.

After having a sweet breakfast at the hotel,continue our journey to Varanasi. After arrival at Varanasi check-in at the hotel and rest of the time is for leisure and relaxation.Overnight stay at the hotel 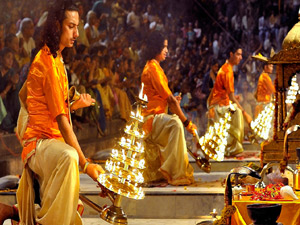 After having a lavish breakfast at the hotel, pay an early morning boat ride in the sacred Ganga River which would be arranged for you then leave for Sarnath (6 km away)- Sarnath is in the northeast of Varanasi is where Lord Buddha delivered his first sermon after attaining enlightenment. A highly sacred Buddhist religious place, Sarnath lies at the confluence of two rivers-Ganga and Gomati.
Popular attractions here are Dhamek Stupa, Sarnath Museum and Chaukhandi Stupa. Now return back to Varanasi. In Varanasi, you would be visiting Alamgir mosque-Also known as Beni Madhav Ka Darera, Alamgir mosque is a brilliant example of Hindu and Mughal architecture.The mosque is situated on the banks of Ganges river.

The city of Varanasi is known for its religious ghats. Most spectacular amongst them is the Dashashwamedh ghat, which is located close to the Vishwanath temple.
Overnight stay at Varanasi.

Day 10: Varanasi to Mumbai by flight

After having a sweet breakfast at the hotel,take a flight for Mumbai for your onward journey.